Enewetak was approved as the site for a new set of tests by President Truman on 2 December 1947 without consultation with the RMI. On the same day, the United States representatives to the United Nations notified the Security Council that effective 1st December 1947, pursuant to the provisions of the Trusteeship Agreement, Eniwetok Atoll was closed for security reasons in order that necessary experiments relating to nuclear fission could be conducted there.’

‘The people of the atoll were to be moved to a new home, and the press release by the Atomic Energy Commission noted: “Eniwetok Atoll was selected as the site for the proving grounds after the careful consideration of all available Pacific Islands. Bikini is not suitable as the site since it lacks sufficient land surface for the instrumentation necessary to the scientific observations which must be made. Of other possible sites, Eniwetok has the fewest inhabitants to be cared for, approximately 145, and, what is very important from a radiological standpoint, it is isolated and there are hundreds of miles of open seas in the direction in which winds might carry radioactive particles.

As the US readied for a new round of tests the onus changed from the ‘weapons effect’ tests of Crossroads to design tests as new, improved configurations and materials are pushed through the pipeline. The early weapons types, like those dropped on Hiroshima and Nagasaki, were recognized as very inefficient; the fissile material was failing to produce the desired destructive energy. The Crossroads tests were designed to study the impact produced by the weapons currently available, almost identical to the ones dropped on Hiroshima and Nagasaki. Sandstone was attempting to find designs with greater destructiveness and efficiency and to pave the way for mass production of weapons that currently had to be assembled by hand. By the latter half of 1948, the United States has 50 nuclear bombs.

Levitated cores were a new development that meant, instead of being solidly inside the tamper, there would be an air gap between the tamper and the core, which would be suspended there on wires. This would allow the tamper to gain more momentum before striking the core, increasing the implosive effect. In order for this to work in the field, the wires had to be strong enough to withstand being dropped from an aircraft, but thin enough to not disturb the perfect spherical symmetry of the implosion. The theoretical division at Los Alamos, known as T Division, had run computer calculations on the levitated core as early March 1945. The use of this innovation had been proposed during the planning for the first set of tests, Operation Crossroads, but it had been decided at that early stage to use the existing solid core “Christy” design, named after its designer, Robert Christy. It was a known quantity and reliable if not terribly inefficient. For Sandstone, however, it was decided that at least two of the three tests would use levitated cores.

At this point, the US had just two facilities for creating plutonium; one, the massive Hanford Reservation in Washington State, the other at Oak Ridge, Tennessee. In the early days of the program, the manufacture of each gram of plutonium cost between $100 and $200. Since the core of a single Fat Man bomb required 6.2kg costing upwards of $1.25 million, duds, failures and inefficient designs could be ill afforded.

Obviously, the islanders, the dri-Enewetak, who lived on the island of Aomon, and the dri-Enjebi, who lived on Bijire would have to be removed entirely during the tests. Their original homes had been on Enewetak island and Enjebi, but they had been displaced during the war to make way for military bases. The entire population of 140 were moved to Ujelang, an uninhabited atoll 143 miles southwest of Enewetak. This would become a lasting tragedy for the people of Enewetak and Bikini as they were moved again and again to pave the way for tests that were vaporizing their homes behind them.

Three islands, Enjebi, Aomon, and Runit Islands were cleared of vegetation to allow for the construction of the shot towers and measurement apparatus. There are three tests in the series, X-Ray, Yoke and Zebra. They are all Mark III, levitated core type devices, which have an air gap between the plutonium core and outer tamper, producing a higher yield and more efficient use of fissionable material.  After just two of the Sandstone tests, the production of the old design, onion-layered cores immediately ceased as the levitated design showed so much more promise. 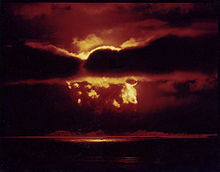 If the US authorities ever elucidated to the Marshallese people what they had planned for their homeland, it’s surpassingly unlikely that they understood what the term ‘nuclear fission’ denoted for their future – few people did at that point, including many involved directly in the testing. It was still believed by many scientists that radioactivity was relatively benign in doses commensurate with an X-Ray per day. Indeed, government radiological testing of troops involved in the tests and subsequent clean-up were not implemented at all until the late 1970’s by which time it was becoming clear that many thousands of them were falling sick.

It’s hard to escape the feeling that the US trashed Enewetak because Bikini simply didn’t have enough land mass for an airstrip (Enewetak already had one, built by the Japanese) and that the prevailing wind direction was unfavorable for take-offs and landings. Bikini could have been spared it’s fate if Enewetak had been chosen at the outset for all the tests. I’m yet to find an answer as to why that did not happen.

N.B. You will notice that the spelling of Enewetak changes over time. This is not a typographic error.